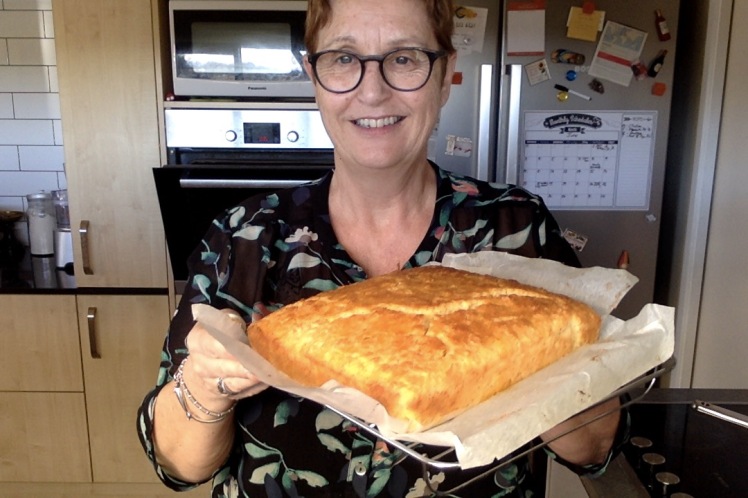 It took a number of years for me to realize that whenever the creative well runs dry I suddenly become the world’s best baker. Or I invite people for elaborate meals. Anything that has an element of creativity is fair game – which is why the floors are still unswept and the weeds run rampant outside.

This is Queens Birthday weekend and a holiday we now share with Thailand. It is their Queen’s Birthday today. Her actual birthday – unlike ours which was either decided on amongst public servants or a drunken monarch who threw a dart at a calendar and  said, “That’ll do. Take Monday off.” Which is something that won’t annoy me much longer. It does annoy me now because I never work Monday. On the face of it it seems fine but take someone else who works 2.5 days a week as I do  and one of those days is a Monday – then they get to take advantage of days off that I do not get. But it’s my last one and I’m not going to worry after today.

I have begun to see leaving nursing as an opportunity to get stuck into a whole new life that doesn’t include sick people. Already I am deleting emails  about flu and meetings on diabetes and smoking cessation and I look forward to being able to erase several sentences from my vocabularly as well.  These include such gems as;  “…and have you taken anything for this sore throat? No? You’ve had this cough since when? Yesterday…”   Some of us fizzle out but not my friend Dr Sue Bagshaw who remains passionate about youth health and is now Dr Dame Sue Bagshaw. It is one of the rare occasions in which I agree with the Honours list.

I am hearing faint cries of help from the trapped manuscript in my office which could be a direct result of the two pieces of cake I had with my lunch – or the radio playing next door.  Whatever the cause, it has jumpstarted my imagination and I’ve just been treated to a picture in my head of all the Dames getting together after the ceremony, kicking off their shoes, filling up their glasses and ringing up the queen with a list of changes they’d like to see PRONTO. Lets face it, a woman gets Dame/age for being bolshy and brilliant  and usually “mature.”  Birth order in the right family is all that determines a queen. I’m telling you now, if I get one I’ll be demanding changes to the holidays act so that people who don’t work on Mondays can take advantage of the holidays they now don’t get.  It seems only fair.